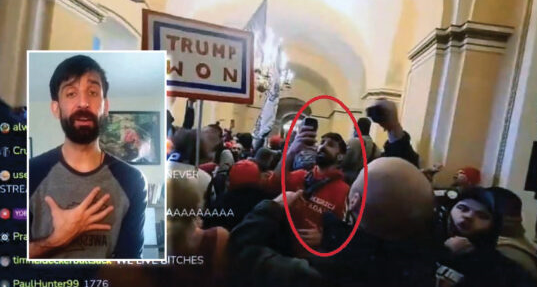 Rioter Who Killed Himself In Jail Was QAnon Follower

Matthew Perna, 37, entered the Capitol after the doors had already been breached by riotous Donald Trump supporters who overran police and swarmed the building in an attempt to stop Congress from certifying Joe Biden‘s win in the 2020 presidential election. According to prosecutors, Perna stayed in the building for about 20 minutes in the Senate Wing Lobby. He was seen on video chanting with the crowd.

Perna also made multiple Facebook posts indicating that he was a QAnon adherent. Perna pleaded guilty in December all four charges against him. Unlike hundreds of other Jan. 6 defendants who struck deals with prosecutors to plead guilty to one or more charges in exchange for other charges being dropped, Perna pleaded guilty to the indictment itself, without a plea deal. The pro-Trump website American Greatness reported that Perna hanged himself.

Read the full article. In a November 18th court filing, Perna’s lawyers announced his intent to plead guilty to one felony and three misdemeanor counts. As you can see above, that indeed happened. Since his death, he’s predictably become the new Ashli Babbitt among Trump cultists.

QAnon Adherent Who Pleaded Guilty to Breaching Capitol on Jan. 6 Reportedly Dies By Suicide Before Sentencinghttps://t.co/OdZzpXRqLk