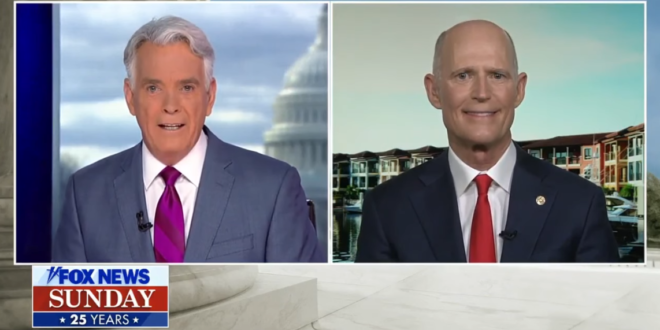 Texts and emails between the wife of a Supreme Court justice and Donald Trump‘s former chief of staff about the Jan. 6, 2021 riots at the Capitol don’t concern Sen. Rick Scott much at all. Instead, he suggested on Fox News Sunday that Justice Thomas’ fairness was enough to put him at ease.

The latest: “I’ve always seen him do the right thing.”@SenRickScott sees no point in Clarence Thomas recusal from Jan. 6 cases

dedicating my day to this queen who saw the senator who stripped her of her healthcare and ran him out of starbucks pic.twitter.com/j0XsRKDR4e

“It’s in the plan! It’s in the plan. But Senator, hang on, it’s not a Democratic talking point. It’s in the plan” — even Fox News’s John Roberts can’t believe it when Rick Scott lies about his own policy plan, which calls for a tax increase on a majority of Americans pic.twitter.com/sa4WgUBgyJ

Ginni Thomas text to Mark Meadows: “Watermarked ballots in over 12 states have been part of a huge Trump & military white hat sting operation in 12 key battleground states.”
In addition to being a traitor, she’s insane.

Clarence Thomas’ wife has embraced the most radical and demented conspiracy theories of QAnon and Alex Jones. https://t.co/NEJUQhzUgQ

Woodward and I both see this as an unprecedented entanglement between a top official in the Exec Branch and the spouse of a Justice.