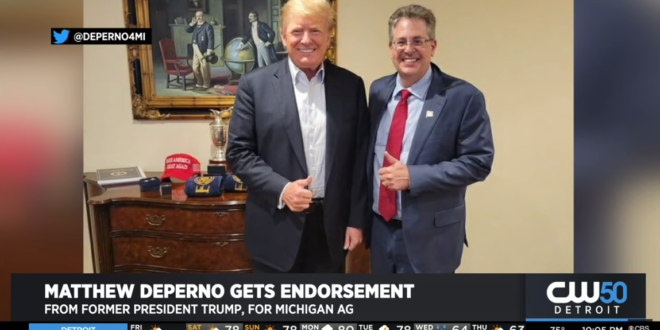 A Republican running to be Michigan’s top law enforcement official was fired from a law firm in 2005 after colleagues alleged he “padded” client billings for personal and professional benefit, according to court records reviewed by Bridge Michigan.

Matt DePerno, an attorney general candidate endorsed by former President Donald Trump, sued the firm over his firing and denied the allegations in court. But he told Bridge he cannot discuss details because of a confidential settlement.

DePerno is best known for defending former state Rep. Todd Courser after a 2015 sex scandal cover up and challenging Antrim County election results in a failed lawsuit that spawned ongoing conspiracy theories about the 2020 election.

Read the full article. There’s much more. DePerno first appeared on JMG last month when he joined other GOP candidates for Michigan attorney general in calling for the repeal of the Supreme Court ruling that legalized contraception.

Matthew DePerno was accused of assaulting a former legal client and getting fired for “fraud, deceit and dishonesty” https://t.co/uMZL4d07Gk

Previous AZ Gov Gets 15-Week “No Exceptions” Abortion Ban Bill
Next Hannity: Make Ukraine Pay Us Back With Resources