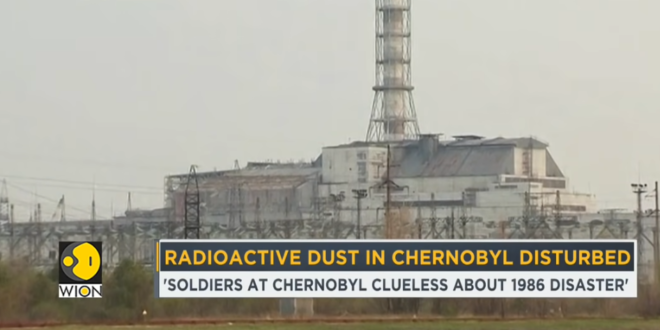 Several hundred Russian soldiers were forced to hastily withdraw from the Chernobyl nuclear power plant in Ukraine after suffering “acute radiation sickness” from contaminated soil, according to Ukrainian officials.

The troops, who reportedly dug trenches in a contaminated Red Forest near the site of the worst nuclear disaster in history, are now being treated in a special medical facility in Gomel, Belarus.

Local reports suggest that seven buses with the zapped troops arrived in Gomel early Thursday. Journalists on the ground have also reported “ghost buses” of dead soldiers being transported from Belarus to Russia under the cover of dark.

The area is considered so highly toxic that not even highly specialized Chernobyl workers are allowed to enter the zone https://t.co/oBxpsln0vR

#UPDATE Russian forces have begun to pull out of the defunct Chernobyl nuclear power site, a US defense official said Wednesday, a day after Moscow said it would scale back attacks on two key Ukrainian cities https://t.co/apsEuYTsif

Chernobyl employees say Russian soldiers had no idea what the plant was and call their behavior ‘suicidal’ https://t.co/SOnhb8iDO2

“The regular soldiers one of the workers spoke to when they worked alongside them in the facility had not heard about the explosion, he said.” Unprotected Russian soldiers disturbed radioactive dust in Chernobyl’s ‘Red Forest’, workers say https://t.co/NZZnF1hhHy

Russian soldiers who seized the site of the Chernobyl nuclear disaster drove their armoured vehicles without radiation protection through a highly toxic zone called the “Red Forest”, kicking up clouds of radioactive dust, workers at the site said. https://t.co/efcDfBORAa