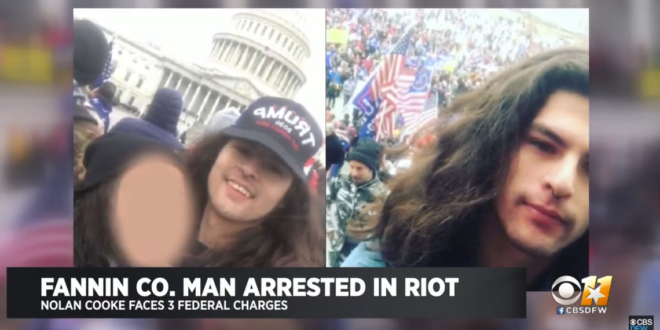 A Texas man who got into a scuffle with police outside the Capitol building on Jan. 6 pleaded guilty to a felony. Nolan Cooke was 22 years old when he traveled to D.C. with his girlfriend and joined the mob of Donald Trump supporters lashing out over Joe Biden’s 2020 presidential win. Although Cooke never made it inside the Capitol that day, he got physical with police during a confrontation outside the building.

In a hearing Wednesday before Senior U.S. District Judge Royce Lamberth, Cooke pleaded guilty to one count of civil disorder, a felony punishable by up to 10 years in prison. “There’s a storm coming,” Nolan allegedly yelled while in that crowd, a reference to the QAnon conspiracy theory that Trump will bring an end to what adherents believe is a cabal of Satan-worshipping cannibal pedophiles.

Texas Man Who Gleefully Participated in Failed Jan. 6 ‘Revolution’ with Girlfriend Pleads Guilty to a Felonyhttps://t.co/XD0zCiYLo4