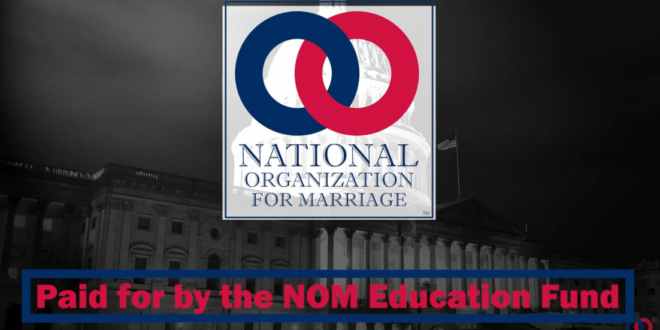 Via email from NOM’s Frank Schubert:

The US Senate Judiciary Committee is presently holding confirmation hearings on the nomination of Judge Ketanji Brown Jackson to the US Supreme Court.

Please watch this new video we’ve created to explain why NOM is urging the Senate to reject her confirmation.

Judge Jackson is a hard-core leftist who is being pushed by radical groups such as leading homosexual lobbyists at the Human Rights Campaign, Planned Parenthood, NARAL and Black Lives Matter.

They know she will be an activist justice who will legislate from the bench, rewriting and reinterpreting our Constitution and laws to advance a “progressive” agenda.

By the end of this week, the Judiciary Committee hearings will be over and the committee will forward Judge Jackson’s nomination to the full Senate, where the rubber will meet the road.

NOM supporters have already generated nearly 250,000 emails to US Senators opposing her confirmation but we need to do more. Please do not let today go by without taking action to oppose Judge Jackson’s confirmation.

After you’ve watched the video explaining why we oppose Judge Jackson’s nomination to the US Supreme Court, please share it widely including on social media.

Then, if you are able, please make a generous financial contribution so that we can distribute the video more broadly and urge more Americans to join our fight against the confirmation of this radical judge.

Rather obviously, NOM has no chance of blocking Jackson’s confirmation, but they’re not to going to miss a chance to fleece the rubes.

The last time NOM issued a money beg authored by Frank Schubert, it was to attack then-vice presidential nominee Kamala Harris for “ignoring her oath” by defending same-sex marriage in California. They didn’t stop her either.