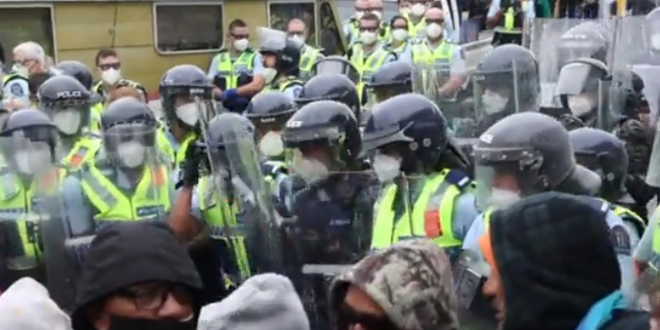 New Zealand police on Wednesday ended an anti-vaccine mandate protest that had disrupted the capital for the past three weeks, dismantling an encampment outside parliament, towing away vehicles and arresting dozens.

Several fires broke out among tents just metres from the parliament building, sending up billows of smoke before being doused by police, a Reuters witness said, as officers tried to clear the grounds.

Riot police have clashed with demonstrators outside New Zealand’s parliament, using pepper spray and making dozens of arrests as they move to end a long-running protest against coronavirus restrictionshttps://t.co/nn2Bmj1o0I pic.twitter.com/e6IBu9w4gh

The protest, modelled on the truckers’ demonstrations in Canada, had taken over the roads and lawn around New Zealand’s Parliament Buildings https://t.co/1XcC5MlGiQ

New Zealand police launched a renewed push to end an anti-vaccine mandate protest that has disrupted the capital for the past three weeks, dismantling an encampment outside parliament and towing away vehicles https://t.co/LosN2mMWUb pic.twitter.com/rAmwZmziwe

Riot police in New Zealand move in to end the weeks-long occupation by anti-vaccination demonstrators outside parliament, clearing camps and trucks.

Please note that this video contains use of explicit language pic.twitter.com/v191UCeIek