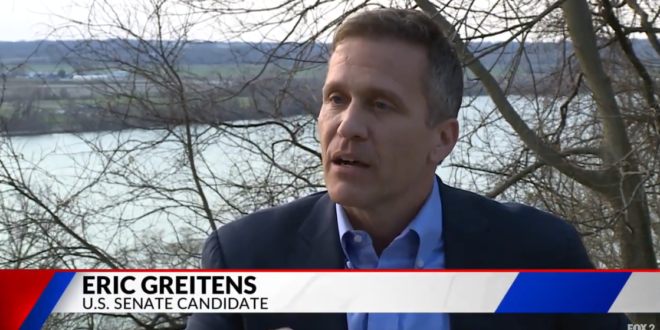 Former Missouri Gov. Eric Greitens, now a leading Republican Senate candidate, was physically abusive and demonstrated such “unstable and coercive behavior” that steps were taken to limit his access to firearms, according to new allegations from his ex-wife revealed in court records on Monday.

The sworn affidavit from Sheena Greitens is part of an ongoing child custody dispute in Missouri. A public affairs professor at the University of Texas, she sought divorce from Eric Greitens after a sex scandal which led to his resignation as governor in June 2018.

At one point, she said, Eric Greitens purchased a gun but refused to tell her where it was. He also threatened to kill himself “unless I provided specific public political support,” she wrote.

Read the full article. Greitens resigned as Missouri governor in 2018 after his mistress accused him of tying her up in his basement and taking “explicit” photographs. Greitens was also later accused of felony campaign finance violations.

The headline is Greitens was allegedly physically abusive to his ex-wife. But the substance is more troubling: that he allegedly abused his three-year-old son as well, cuffing him and yanking him by his hair https://t.co/bzQBoxR9im

For all of the politicians calling for war in Ukraine, there’s just one question: When are you going?

If you think Ukraine is worth a war, then go…and tell us what it was like when you come back. pic.twitter.com/Y72NXESkZD

Previous Cops Called After Cruz Melts Down Over Missed Flight
Next Late GOP Rep. Don Young To Lie In State At US Capitol