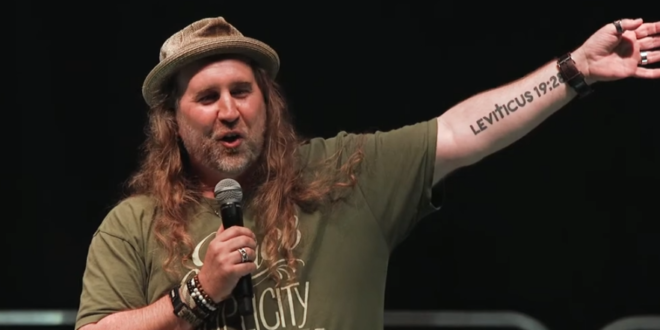 Bruxy Cavey, the primary teaching pastor of one of Canada’s largest megachurches, The Meeting House, has resigned after an independent investigation into allegations of sexual misconduct commissioned by the church last December concluded that he abused his power.

“The investigator determined that Bruxy had maintained a sexual relationship with the victim, an adult woman, in violation of The Meeting House policy and the Handbook of Faith and Life of Be in Christ Church of Canada,” Maggie John, chair of the church’s overseers board, said in a statement Tuesday.

“This began during a pastoral-counseling relationship when I was 23 and he was 46,” the victim’s statement reads. “I was in crisis and trust in him. I did not, nor could I, consent to a sexual relationship with him.”

Read the full article. The Meeting House reportedly has 19 campuses across Ontario. As you can see, Cavey has a tattoo of Leviticus 19:28, which says, “Do not cut your bodies for the dead or put tattoo marks on yourselves. I am the Lord.” According to Cavey, he chose that verse as the most emblematic of how Jesus freed Christians from the laws of the Old Testament. Or something.

Following a 3rd-party investigation into allegations of sexual misconduct, @Bruxy Cavey of @TheMeetingHouse has resigned

Also resigning “in solidarity with the victim of abuse” is Danielle Strickland (@djstrickland) a pastor at the church & popular authorhttps://t.co/w9eCJw6jMa