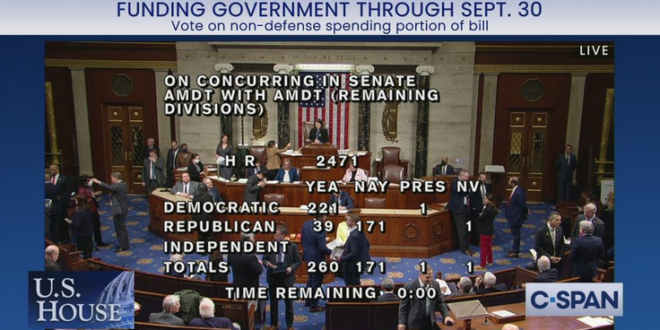 The House on Wednesday passed a sprawling $1.5 trillion federal spending bill that includes a huge infusion of aid for war-torn Ukraine and money to keep the government funded through September, after jettisoning a package to fund President Biden’s new Covid-19 response effort.

Bipartisan approval of the first major government spending legislation of Mr. Biden’s presidency marked the first time since he took office that Democrats were able to use their congressional majorities and control of the White House to set funding levels for their priorities, including climate resilience, public education and child care.

Passage of the Ukraine aid and the $1.5 trillion government-wide legislation carrying it let both parties lay claim to election-year victories for their priorities.

Democrats won treasured domestic initiatives, Republicans achieved defense boosts, and both got their imprint on funds to counter Russia’s brutal invasion of its western neighbor. Senate approval was assured by week’s end or perhaps slightly longer.

Hours earlier, House Speaker Nancy Pelosi, D-Calif., had to abandon the bill’s $15.6 billion for combating the pandemic, a decision she called “heartbreaking” and that spelled defeat for a top priority of President Joe Biden and party leaders.

The spending bill, known as the omnibus, provides funding through fiscal year 2022, which started in October.

Lawmakers have been negotiating over the legislation for months and have passed three stopgap funding bills to keep the government running in the meantime. That means federal agencies have been funded at 2021 levels for the past five months.

The bill renews the Violence Against Women Act, which expired in 2018, by increasing funding for its prevention and prosecution programs, as well as efforts to reduce the backlog of unprocessed rape kits, according to a fact sheet.