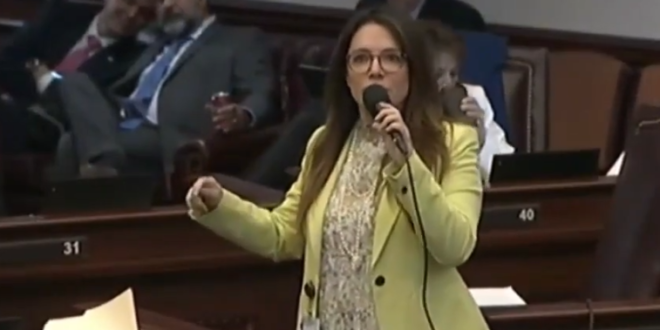 GOP Florida Senator: “Gay Is Not A Permanent Thing”

Florida state Sen. Ileana Garcia (R) expressed her support for a so-called “Don’t Say Gay” bill on Tuesday by arguing that “LGBT is not a permanent thing.”

During a 15-minute speech on the Senate floor, Garcia argued in favor of a bill that would prevent teachers from discussing sexual orientation and gender identity with younger students.

Garcia went on to spout fake statistics about LGBT suicide rates and told a story about a trans woman who prefers to date women. Which proves something, apparently.

Garcia is the founder of Latinas For Trump, for which Trump rewarded her with a Homeland Security post.

She was elected to the Florida Senate in November 2020 in the now-infamous “ghost candidate” scandal in which votes were siphoned away from the incumbent by a man with same last name. Garcia, allegedly, was not involved in the plot which has resulted so far in one arrest.