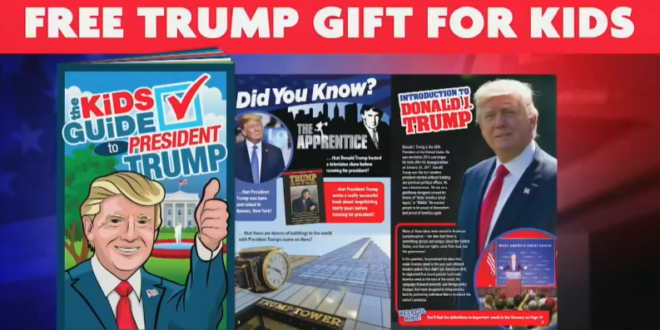 Fox News aired a commercial for a children’s book about the accomplishments of former President Donald Trump, which is being offered by Mike Huckabee’s “education company.”

“The mainstream media has been no friend to President Trump, and they’ll never admit that he did a great job leading our country and making the changes that America needs,” the website states.

“But, as future voters, our children and grandchildren deserve to understand the truth about President Trump and what made him a great president.” Furthermore, the guide claims it will educate children about Trump’s 2016 election and policy accomplishments in an “unbiased” nature.

Read the full article. OMG, watch the clip. Last fall the Daily Beast did an expose’ on Huckabee children’s books scam. Titles include “Horton Hears A Hoax” and “The Cat In The MAGA Hat.” Seriously.