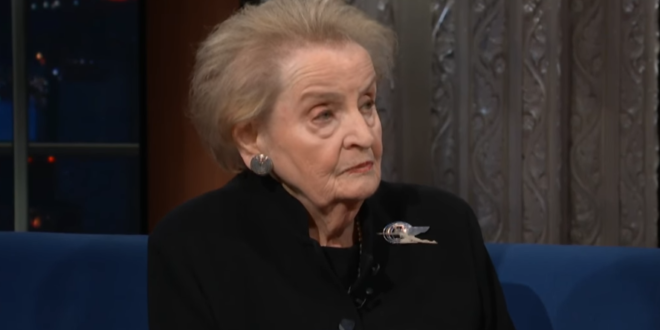 Madeleine Albright, the first woman US secretary of state, who helped steer Western foreign policy in the aftermath of the Cold War, has died. She was 84 years old. Her death was confirmed in an email to staff of the Albright Stonebridge Group, a global strategy firm founded by Albright.

From the State Department:

Albright is the first woman to have served as U.S. secretary of state. While in this role, she utilized an unconventional and effective tool for diplomacy on America’s behalf: pins worn on her suit lapels.

These served as “gentle implements of statecraft, teaching tools and a different form of communication,” she told ShareAmerica. “Most times, they convey a sense of humor, which is often needed in negotiations.”

Born in Prague, Albright immigrated with her parents to England as a 2-year-old in 1939. Her family moved to the United States almost a decade later.

As an immigrant from a country that suffered the tyrannies of fascism, Albright stood up for democracy and staunchly supported the NATO alliance.

In 1997, President Bill Clinton appointed Albright as the first female secretary of state, making her the highest-ranking woman in the history of the U.S. government at the time.

Previous Graham Again Storms Out After Abusive Questioning
Next QAnon/GOP Texas Candidate: God Will Punish You For Stealing The Seat I Was Appointed To By Jesus [VIDEO]