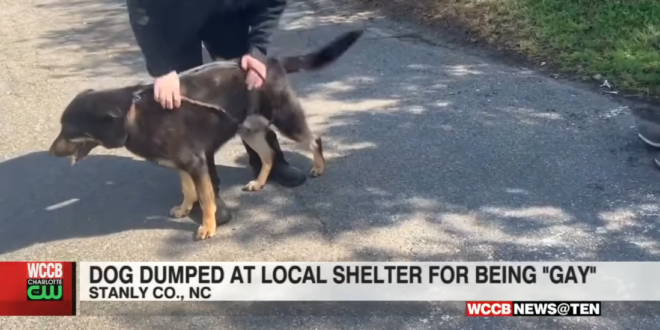 Dog Dumped At North Carolina Shelter For Being “Gay”

A local shelter dog is looking for a soft landing after being dumped by his owners for being “gay.” A Stanly County Animal Shelter Facebook post says the dog’s owners surrendered him to the shelter after he humped another male dog. Fezco, the shelter says, is about four to five years old and weighs about 50 pounds. They say he likes people and other animals. The shelter is asking for local rescues to step up and take Fezco into foster before he is adopted.

Read the full article. The above-linked station has wisely turned off comments on their YouTube clip below.

Can dogs be gay or lesbian?

Fezco was dumped at a North Carolina animal shelter for being gay. His owners ditched him after they saw Fezco humping another male dog. ASPCA: Mounting or thrusting is normal play behavior for pets. Scientific America: Homosexual behavior has been noted in 1,500 animal species. pic.twitter.com/HC6Fj6NF0r