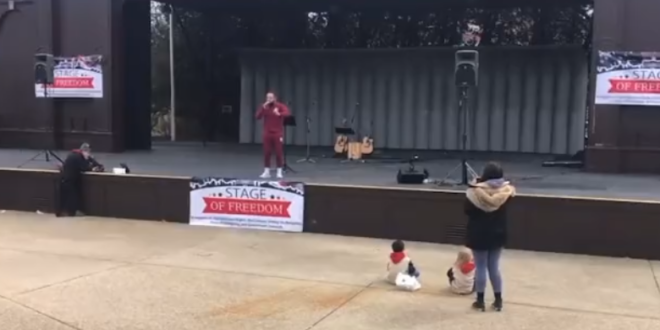 A rally on the Washington Monument grounds Tuesday to support trucker convoys has drawn a minuscule crowd so far. About 20 people are in attendance, Washingtonian photographer Evy Mages reports from the scene, as well as a similar number of people who are there to cover the event.

The rally was organized by Kyle Sefcik, an MMA fighter and independent candidate for governor in Maryland. Sefcik was also the organizer of a convoy called Freedom Convoy USA 2022, which was due to arrive in DC Tuesday but fizzled out when only five trucks showed up in Las Vegas.

Sefcik’s permit application to the Park Service predicted that up to 3000 would attend today.

For what it’s worth, TikTok has been flooded with live-streams showing multiple trucker convoys around the country.

Nobody knows how many will eventually appear in DC, but some of them planned to arrive ahead of tonight’s State of the Union address.

The pro-trucker-convoy rally in D.C. today looks like another bust, with about 20 people in attendance. I wrote about the problem these gatherings pose for a city stung by repeated far-right incursions: https://t.co/kJSfjdduNu

Wow, this huge ‘Freedom Convoy’ trucker rally in DC is lit. Really making a bold statement. Three weeks of hype from Steve Bannon every day. For this? From @FordFischer pic.twitter.com/UQDLAqdSSq

The trucker protest by the Washington Monument is off to a slow and cold start. As of now, only 10 folks with the “Stage of Freedom” event are here. More press and police than rally-goers. pic.twitter.com/x85xEvzlNn

Rally organizer and MMA fighter Kyle Sefcik isn’t pleased with truckers over not showing up and “being about it” today. pic.twitter.com/HMzhCtFuBx

Many truckers do not own trucks; they lease. It is a simple contract about responsible use. When Penske truck rental saw a quote @nytimes, and pictures on social media, that one of its driver’s was heading to DC convoy, it shut the truck down remotely.https://t.co/cpAFjE41oK