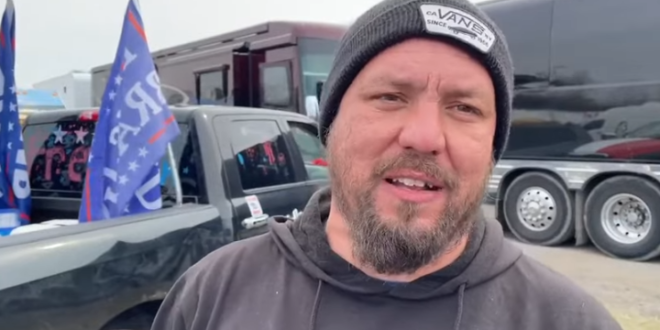 A convoy of truckers and other supporters circled the capital on the Beltway for a second day on Monday, protesting Covid-19 mandates and hoping to attract attention from lawmakers. Brian Brase, a convoy organizer, told participants that the convoy would again avoid entering Washington, D.C.

He stressed that the protesters did not want to spur a violent event like the Jan. 6 attack on the Capitol, which he said would discredit the group. And he said the group did not intend to tie up traffic. “We don’t want to shut down the Beltway,” Mr. Brase said. “We want them to hear us roar.” A similar demonstration on Sunday had minimal impact on traffic.

When The Daily Beast asked a convoy participant if anything was being accomplished by driving in circles, the car took offhttps://t.co/dRKX65ZAAZ

I love that everyone participating in the trucker convoy saw this sign on the DC beltway — TRUMP LOST LOL! 😂 pic.twitter.com/c9sw2JFPIs

US trucker convoy leader @brianbrase84: “I am fearful of them trying to do to us what they did to those involved in Jan 6. It is our belief that they WILL try to do that….that means at this time, meaning today, tomorrow, we are not and will not go into DC proper.” pic.twitter.com/oDPdIy8F7l

Previous FL To Advise Against COVID Vax For “Healthy Children”
Next UN Tally: 1.7M Ukrainians Have Fled Invasion So Far