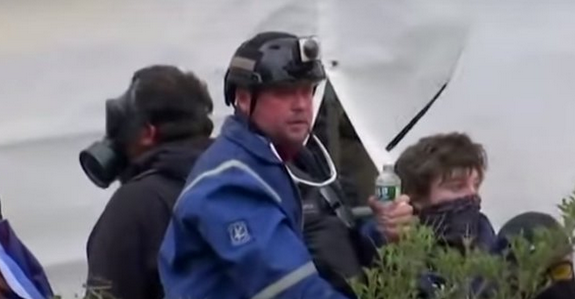 Cultist Testifies On Plan To Drag Pelosi Out Of Capitol

A former Texas militia member who drove to Washington to join the pro-Trump protests on Jan. 6, 2021 testified Friday that he and his traveling companion – the first person to face trial over the storming of the Capitol – talked about violently pulling Speaker Nancy Pelosi from the building.

“We said she needs to be dragged out by her ankles and her feet,” said Rocky Hardie, a member of the Texas Three Percenters, testified as he detailed his interactions with defendant Guy Reffitt [photo], a fellow member of the militia. “I made a joke that I imagined her head going down the stairs, going boom-boom-boom-boom.”

“I think we used the phrase, ‘It’s better to be tried by a jury of 12 than carried by 6 [pallbearers]'”
Well, Guy Reffitt got his jury of 12.
At the Capitol rioter’s trial, his TX-to-DC traveling companion said they were both armed on January 6. https://t.co/HDyYcXsAk8