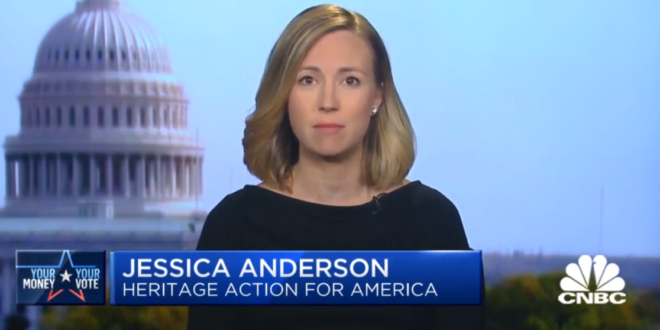 A major conservative group is urging Republican lawmakers to vote against a massive government spending bill, arguing it will increase spending on progressive priorities and railing against the limited time members will have had to read the legislation.

Heritage Action, a conservative advocacy group and the sister organization of the Heritage Foundation, said it will use lawmakers’ votes on the $1.5 trillion spending package on its scorecard that tracks how often lawmakers vote in line with conservative policies.

Congressional Democrats and Republicans on Wednesday finalized a roughly $1.5 trillion measure that provisions massive funding increases for key federal agencies and programs, setting in motion a bipartisan push to stave off a looming government shutdown set to occur at the end of the week.

The release of the sweeping spending package, known in congressional parlance as an omnibus, put to end a tumultuous few months of bipartisan negotiations on Capitol Hill.

It opened the door for the House to vote as soon as Wednesday on the measure, which lawmakers have used as the vehicle to advance roughly $14 billion in new humanitarian, military and economic assistance for Ukraine.

The $1.5 trillion package would send $13.6 billion to Ukraine, with roughly half of that for humanitarian and economic aid, and the other half for defense in Ukraine as well as in U.S. allies in the Baltics and Central and Eastern Europe. https://t.co/OSjdgXrfov

Heritage Action OPPOSES the Consolidated Appropriations Act of 2022 (H.R. 2471) and will include this vote on our legislative scorecard.

We encourage members of the House to vote NO.

For more on the bill. ⬇️https://t.co/mmEmoyaoQz