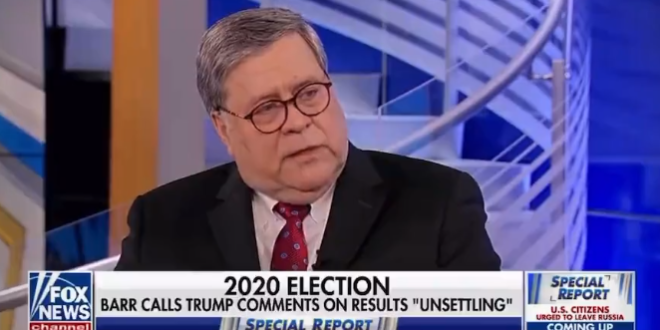 Bill Barr: Trump Was “Livid And Shaking” After Losing

“It was certainly unsettling when I went in to talk to the president about the election and you know, he was livid and shaking and showed a lot of temper and yelling. That was a little unsettling.

“But the other thing that was actually unsettling was later when I went in to actually give him my letter of resignation, he started talking about how he had actually won the election and how the machines were rigged and that he was actually going to be there for another term.

“And he was very confident of that. And I just felt this showed a detachment from reality that was stunning to me. He was willing to accept anything, no matter how fanciful, as long as it didn’t make him a loser in the election.

“The truth is he lost the election. I understand a lot of these very sensational stories come out online and in social media but they’re simply not accurate.” – Bill Barr, last night on Fox News. Earlier this week Barr said he’d still vote for Trump in 2024.

Barr tonight: “He was livid and shaking, showed a lot of temper and yelling .. He started talking about he won the election, the machines are rigged and he was going to be there another term. This showed a detachment from reality that was stunning to me.” pic.twitter.com/X8TNjrEgDx