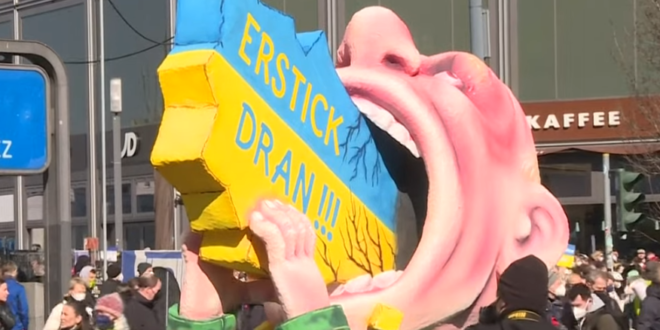 Tens of thousands men, women and children joined an anti-war demonstration in central Berlin on Sunday, with many waving Ukrainian flags or holding banners with slogans opposing the Russian invasion.

Gathering near the Brandenburg Gate, symbol of a divided Germany during the Cold War, protesters – including people in wheelchairs and toddlers in pushchairs – walked through the streets of Berlin, at times chanting and singing.

People across Germany have taken to the streets to protest Russia’s war of aggression against Ukraine:

#NoWar in Ukraine! 60.000 people have come to the Peace☮️ March in Berlin today to protest against the war and show their #SolidaritywithUkraine! #StopptDenKrieg pic.twitter.com/31CeCLv9zn

#StandWithUkraine: Tens of thousands took to the streets in Berlin and across Germany again today to show #SolidarityWithUkraine and to protest against #PutinsWar in #Ukraine. 🇺🇦🇩🇪🇪🇺 pic.twitter.com/2OD4jsCqtC