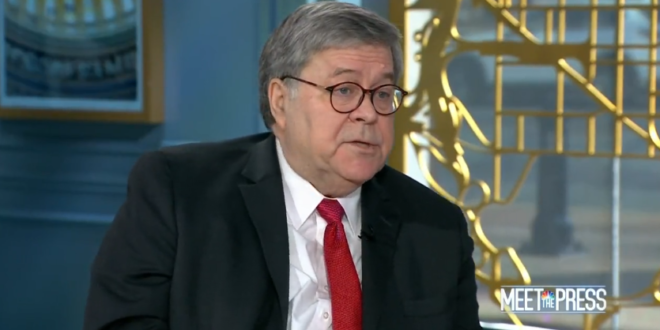 Former Attorney General William Barr on Sunday said progressives are “dangerous” to the country and indicated that he could support Donald Trump should he win the Republican nomination in 2024.

Barr said on NBC’s “Meet The Press” that he’d favor a generic Republican nominee over the former president if he decides to run again.

But when host Chuck Todd asked whether he would support Trump over Joe Biden in a potential presidential rematch, the former attorney general said: “Well, I think there are a lot of American people right now that might prefer having him back in office than Biden.”

Bill Barr compares working with Trump and his cronies to ‘wrestling an alligator’ https://t.co/qrh3t2INJL

On Meet the Press, Bill Barr absurdly claims there was no evidence before the 2020 election that Trump would refuse to leave office if he lost, and tries to bothsides his party’s increasing openly embrace of authoritarianism by insisting Democrats are just as bad pic.twitter.com/d7Z5QyJFQN

Barr: ‘I was surprised’ Trump was ‘taking things so far’ after electionhttps://t.co/IWWzWEuwJP pic.twitter.com/zwI13SLcj7

In an exclusive interview with Meet the Press, former U.S. Attorney General William Barr says he would vote for President Trump in 2024 bid, also says, “I don’t support his renomination.” #MTP

“I’m going to support somebody else.” pic.twitter.com/XlIZK52H2l

“He went off the rails at the end. … I was surprised he was taking things so far.” pic.twitter.com/AxMTMbu7Nc