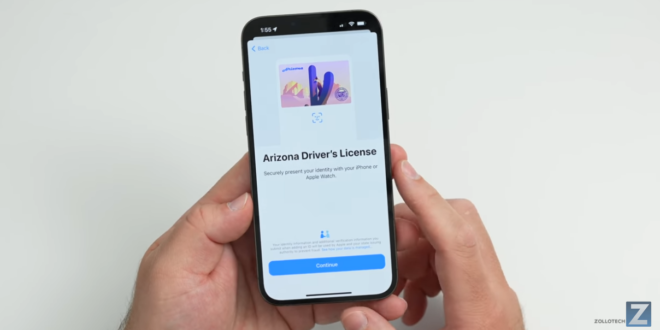 The first state to officially roll out Apple’s digital driver’s license and state ID is Arizona, the iPhone maker announced Wednesday. “Starting today, Arizonans can add their driver’s license or state ID to Wallet, and tap their iPhone or Apple Watch to seamlessly and securely present it at select TSA security checkpoints in Phoenix Sky Harbor International Airport,” Apple announced in a press release.

If you live in Arizona and want to add your license or ID to Wallet, you can do so right from the Wallet app. Take photos of the front and back of your license or ID, and you will “be prompted to complete a series of facial and head movements during the setup process,” according to Apple. Apple is not the one approving requests to add licenses or IDs to Wallet — instead, the company says Arizona will be responsible for that.

Read the full article. The last video below is a tutorial.

Arizona is the first state to put its driver’s license and state ID in Apple’s Wallet https://t.co/NXI9QGcSrC pic.twitter.com/sbou7WrlpX

Arizona residents can now add their drivers’ license, or state ID, to Apple Wallet, which lets them use an #iPhone to check in at selected TSA checkpoints. https://t.co/Mzfp1U6v3r pic.twitter.com/hJOWyJHWrq

“Arizona is proud to be the first state to give our residents the choice to add their ID to Apple Wallet,” shared Arizona MVD Director Eric Jorgensen.@ArizonaDOT @PHXSkyHarbor @TSA