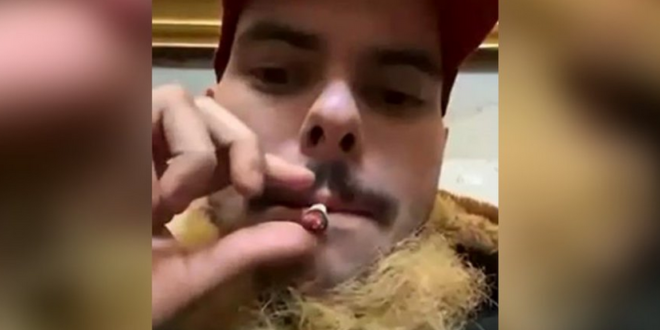 A New York man who recorded himself smoking what appeared to be marijuana inside the Capitol Rotunda after having breached the building on Jan. 6, 2021, has pleaded guilty to ten charges.

Greg Rubenacker, 26, appeared before Chief U.S. District Judge Beryl Howell on Friday and pleaded guilty to all ten counts against him. Three are felonies; seven are misdemeanors. The list includes a guilty plea to a federal obstruction charge that carries a potential 20-year prison sentence.

Under the government’s calculations, Rubenacker’s estimated sentencing guideline range would range from 41 to 51 months’ imprisonment and a fine from $15,000 to $150,000, according to court filings.

‘Smoke Out the Capitol, Baby’: Long Island Man Who Lit Up in the Capitol Rotunda on Jan. 6 Pleads Guiltyhttps://t.co/ibonR1L0M9

“Who are you guys serving? We are the people!”

Greg Rubenacker has pleaded guilty to 10 counts. Body worn camera footage from his case below, which shows the fight inside the rotunda. pic.twitter.com/JLe1Z8i6KE

MORE: New York DJ Greg Rubenacker rejected the govt.’s offer on two counts and instead pleaded guilty to all 10 against him. He could face a recommended sentencing guideline of 41-51 months in prison. https://t.co/wvEeVyYLqZ #CapitolRiot @wusa9 @EricFlackTV