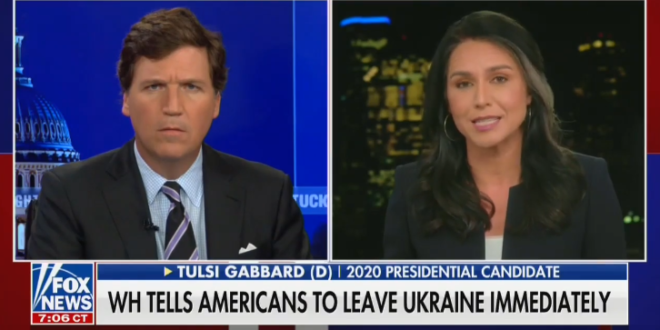 “First of all, President Biden could end this crisis and prevent a war with Russia by doing something very simple.

“Guaranteeing that Ukraine will not become a member of NATO – because if Ukraine became a member of NATO, that would put U.S. and NATO troops right on the doorstep of Russia, which, as Putin has laid out, would undermine their national security interests.

“So the question is, why don’t president Biden and NATO leaders actually just say that and guarantee it? Which begs the question of why are we in this position then?

“If the answer to this and preventing this war from happening is very clear as day. And really, it just points to one conclusion that I can see, which is, they actually want to Russia to invade Ukraine.” – Former Rep. Tulsi Gabbard.