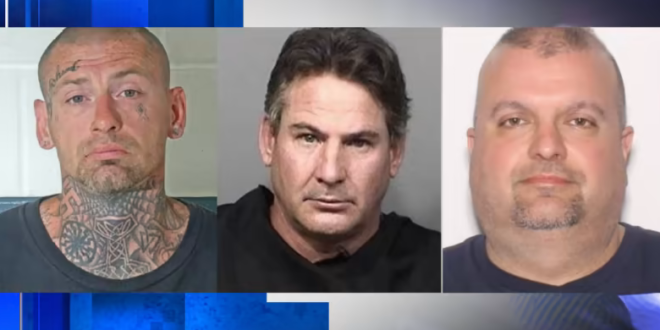 Three people have been arrested days after a Jewish passerby was attacked by a group of self-proclaimed neo-Nazis who yelled antisemitic slogans outside a central Florida shopping plaza over the weekend, authorities said Friday.

Group leader Burt Colucci, 45, and Joshua Terrell, 46, are each charged with battery with a hate crime enhancement, while Jason Brown, 47, is charged with grand theft, according to the Orange County Sheriff’s Office. All three are members of the National Socialist Movement, one of the nation’s largest neo-Nazi groups, officials said.

More than a dozen demonstrators, wearing Nazi garb, protested at an intersection near the University of Central Florida on Saturday and waved a swastika flag from a highway overpass on Sunday.

Other video showed the victim getting into an argument with an older neo-Nazi who spat at the victim’s car before the victim got out and shoved him to the ground. The victim was then punched repeatedly by Terrell and pepper-sprayed by Colucci, deputies said.

Brown then allegedly stole the victim’s phone, which was dropped on the ground during the beating and was later found “damaged beyond repair,” the affidavits said. The affidavits did not name the victim, but WOFL-Fox 35 reported that he is David Newstat, a UCF student.

A snippet of slowed-down video showing the altercation was posted to the neo-Nazi group’s website, claiming the old man, a 74-year-old the affidavits said is known as “Grandfather,” was the “actual victim” and called for Newstat to be charged.

Colucci already faces hate crime charges in Arizona for threatening black men with a gun outside of their hotel.

More closeups of the Florida Nazis seen in Orlando. Really disgusting to see this but this is what the constant misinformation, conspiracy theories, and hateful rhetoric that is prevalent in right wing Florida politics leads to.pic.twitter.com/fxA2yJ0UgE

DeSantis says people are upset about Nazis in Florida because of Biden. What a hack? ⁦@RemoveRon⁩ pic.twitter.com/IDfMPQ7wX8