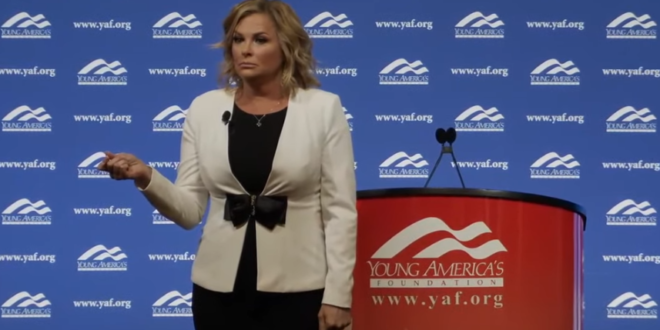 A Texas House of Representatives candidate and former teacher was recorded at a forum complaining that she couldn’t let “kids laugh at” transgender classmates. Shelley Luther, a salon owner and former school Spanish teacher who is running to represent Texas House District 62 in northeast Texas, was recorded by the Houston Chronicle while speaking at a candidate forum on Saturday.

In the recording, Luther can be heard speaking about the transgender community and her experience teaching transgender students. “I am not comfortable with the transgenders,” she said. “The kids that they brought in my classroom when they said that this kid is transgendering into a different sex, that I couldn’t have kids laugh at them. Like, other kids got in trouble for having transgender kids in my class.”

If Luther’s name rings a bell, that’s because she appeared on JMG multiple times in 2020 when she reopened her hair salon in defiance of local lockdown orders and was jailed for a week after tearing up a cease-and-desist order from a Houston judge.

As was quickly learned, the entire stunt had been staged by an anti-lockdown group. Luther, who had taken $18,000 in bailout money, got another $500,000 in crowdfunding donations.

She was visited for haircuts by Ted Cruz and Sarah Palin, appeared on The View, and even launched a run for the state senate, losing by 13 points.

The group behind the stunt had set up her donations page in advance of her reopening the salon, leading many to suspect that they had shopped around for the right martyr.

In April 2021, the Texas Supreme Court voided her arrest.

WATCH: Shelley Luther, a Texas GOP candidate and former teacher, said transgender children make her uncomfortable, and she complained that their classmates weren’t allowed to make fun of them. https://t.co/c8AX8IFpY8 pic.twitter.com/R25rfROza7

2/ During a candidate forum Saturday, Luther cited the presence of transgender children in Texas classrooms as the reason she supports “school choice” in response to a question about what she’d do to enact conservative priorities in a divided Legislature. https://t.co/bzevg4RtPi

3/ Luther’s comments drew rebuke from Equality Texas, which advocates for the rights of gay and transgender Texans. The group’s CEO said all Texas school children should “feel a sense of belonging in school so they can focus on academic success.” https://t.co/c8AX8IFXNG pic.twitter.com/CWttXNowOs

4/ Luther said in an email to the Houston Chronicle that she “respected and supported all students” but claimed it became hard for her to teach because “the topic of gender transition became the top discussion every day in my classroom.” https://t.co/c8AX8IFXNG

5/ It’s not the first time Luther has gotten blowback over divisive rhetoric. In January, she came under fire for tweeting that Chinese students should not be allowed to enroll in state universities. https://t.co/c8AX8InOzy

6/ Though she deleted the tweet, her website still says, “We should not allow Chinese Nationals into our colleges where they can obtain classified information, steal technology, and essentially learn how to defeat the United States.” https://t.co/c8AX8IFXNG

Shelley Luther is running in a district I am in. Unfortunately, because we are rural, we couldn’t find a Democratic candidate to run this time around. Her only opponent is another Republican. We don’t need this representing North Texas. We have to build better Democratic support. https://t.co/LxuonEpdyu