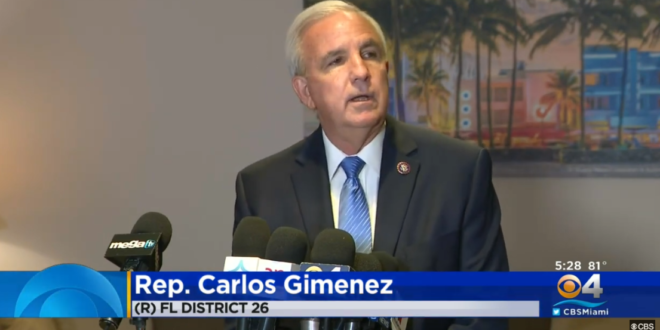 The son of U.S. Rep. Carlos Gimenez was arrested Wednesday after police say he slapped a Miami city commissioner earlier in the day at Morton’s Steakhouse in Coral Gables. What triggered the spat, the latest episode in the long-running telenovela of Miami politics, was not immediately clear. But the two men involved — Miami commissioner Alex Diaz de la Portilla and Carlos J. Gimenez, a lawyer and lobbyist who friends call CJ — are members of powerful political families with ties going back more than a decade.

CJ Gimenez, a married father of two, is a lawyer and government lobbyist in Miami-Dade County. His father, the former mayor of Miami-Dade County, was elected to the U.S. House of Representatives in 2020. Among his past clients is former President Donald Trump. The representation ended when Trump ran for office in 2016. He touted his connections to the newly elected president in early 2017 when he formed a boutique lobbying shop aimed at clients interested in dealings in D.C. and Latin America.

Freshman Rep. Gimenez appeared on JMG several times during the early months of the pandemic as Miami hospitals struggled. In May 2021, CNN reported that an aide to Gimenez overheard a plot to storm FBI headquarters hours before the assault on the Capitol.