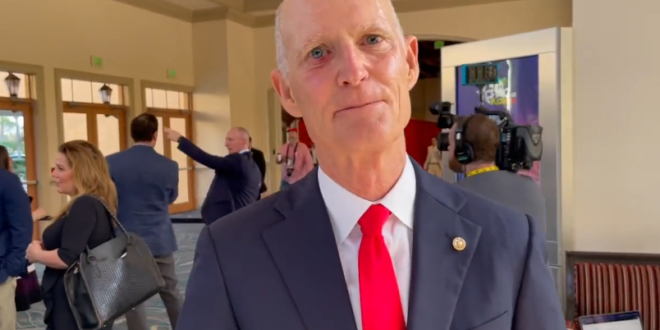 Sen. Rick Scott (R-Fla.), chairman of the Senate Republican campaign arm, dodged questioning on Saturday regarding whether former President Trump should condemn Russian President Vladimir Putin for Russia’s invasion of Ukraine. In a brief interview with CBS News’s Robert Costa at the Conservative Political Action Conference, Scott was asked if Trump, who is scheduled to speak later Saturday, should condemn Putin.

“Well, clearly, we all ought to be condemning what’s going on in Ukraine. I mean, Putin is a thug. We need to hold him accountable. I hope the Biden administration, hope everybody, you know, holds — does everything they can to hold the Biden administration —” Scott said before Costa interjected to ask if that included Trump. Scott said that was a decision Trump needed to make.

Should Trump condemn the Russian invasion when he speaks at CPAC tonight? Even out of power, he remains a central figure in many GOP races nationwide.

“That’s a decision” for him. pic.twitter.com/ZKKUFe5JtR