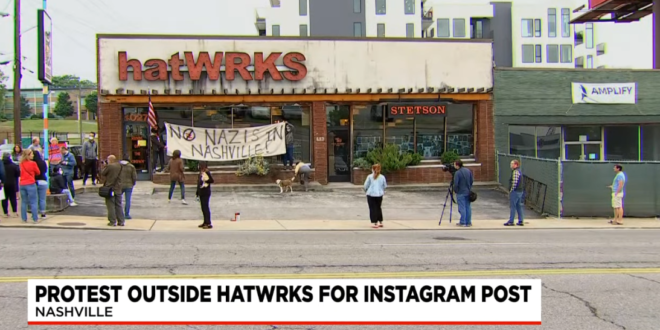 QAnon Hat Seller Sues Stetson For Cutting Her Off

HatWRKS, the Nashville headwear distributor previously famous mostly for various MAGA-adjacent messaging on the side of its Eighth Avenue store, found itself in a bit of a pickle last year. Its owner, Gigi Gaskins, posted a picture of a woman wearing a yellow Star of David, similar to the ones the Nazis made Jewish people wear, with the words “Not Vaccinated” printed upon it.

The backlash against HatWRKS and Gaskins, you may recall, was swift and decisive. Stetson almost immediately announced its products would no longer be sold through HatWRKS. According to a federal lawsuit filed Tuesday, HatWRKS wants those hats back (or at least several million dollars for their trouble). HatWRKS alleges that Stetson violates the Sherman Anti-Trust Act and Tennessee law as an unreasonable restraint of trade.

Read the full article. Gaskins also claims that since she gets automated confirmations of orders since placed with Stetson’s distributor, they are in breach of contract for not fulfilling said orders. My first post on the store is here. It appears that Gaskins is continuing to sell Star of David patches for $5 each.

The lawsuit alleges that Stetson’s refusal to sell to HatWRKS — while continuing to sell to competitors in the Nashville market who did not post something dumb on Instagram — violates the Sherman Anti-Trust Act and Tennessee law as an unreasonable restraint of trade. https://t.co/yKqsvk7Bqe

@FBI her name is Gigi Gaskins and she owns hatWRKS in Nashville TN. Just an FYI. pic.twitter.com/k63d7d1hyK