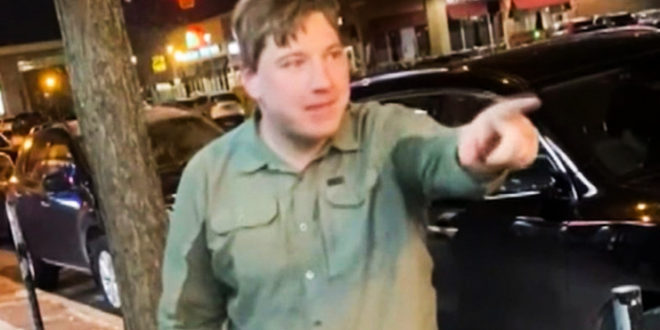 A chapter leader in the far-right Proud Boys extremist gang was charged with assault Sunday in Akron, Ohio, after he was recorded shouting racial epithets at a Black woman and then sucker-punching her in the face.

A man police identified as Andrew Walls, 26, was caught on video outside a bar in the early hours of Sunday, stumbling and scuffling with other patrons while spewing a torrent of racial slurs.

His victim, 23-year-old Cameron Morgan, was passing by with a friend when she heard Walls and others around him screaming “Fucking niggers.” Walls kept going after the recording ended, and dragged Morgan into the street by her hair, her father said.

Read the full article. Walls is facing a felony assault charge. Police are considering an added charge of “ethnic intimidation.”

“stand back and stand by”

Please! I need to press charges! I’m heartbroken and sick to my stomach. pic.twitter.com/42nddAm5gh

According to this article (with photo) Andrew Walls is also the vice-president of the Akron-Canton chapter of the Proud Boys. https://t.co/mv9ZThIxBL