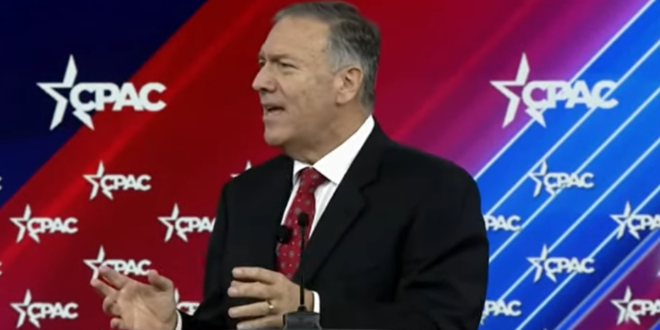 Former Secretary of State Mike Pompeo claimed on Friday that the United States expressed “resolve” for Ukraine “four years prior” – despite his boss, former President Donald Trump, attempting a quid-pro-quo with Ukraine over U.S. assistance to that country.

“We’ve seen a Russian dictator now terrorize the Ukrainian people because America didn’t demonstrate the resolve that we did for the four years prior,” said Pompeo at CPAC.

In 2019, Trump sought to have the Ukrainians investigate President Joe Biden, then a presidential candidate, and his son, Hunter Biden, in exchange for the military aid. As a result, Trump was impeached.

Don’t forget that Donald Trump was impeached (the first time) after he illegally withheld military aide from Ukraine in an attempt to get them to interfere with our democratic process.

Does not mention, though, how the Taliban returned to power. How he and Trump cut a deal with the Taliban to leave the country, cutting the Afghan government out of the negotiations. pic.twitter.com/tLOZGUamPl

NBC: Russian state media has played your own words…[calling] Putin shrewd, capable & you said you have enormous respect. Do you regret your words?

#CPAC: Former Secretary of State Mike Pompeo jokes about his weight loss and asks the #CPAC audience to “pray that I can keep it off.” pic.twitter.com/FQFkZQom2N