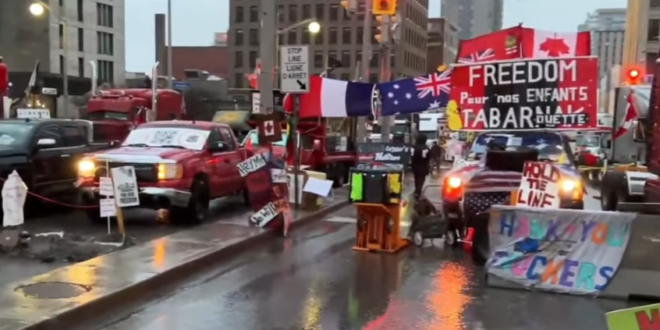 The Ontario provincial police mobilized outside Ottawa’s city center on Thursday, in what appeared to be preparation for a promised clampdown on protesters who have paralyzed the capital of Canada for three weeks.

In the early morning, police officers were seen leaving a convention center near the airport where they had gathered. Police vehicles, which had filled a large parking lot, began to leave.

TRUCKERS ON NOTICE: Police in Ottawa distributed notices warning “Freedom Convoy” supporters of potential consequences if they remained on protest sites on Thursday. A day earlier, police warned that demonstrators would face “severe penalties” if they did not remove themselves. pic.twitter.com/PjmHYeCYda

The OPS wants to inform you that under provincial and federal legislation, you will face severe penalties if you do not cease further unlawful activity and remove your vehicle and/or property immediately from all unlawful protest sites.

NEW: I have seen unclassified intelligence assessments that warned Ottawa Police that ideologically-motivated violent extremist elements were involved in the “Freedom Convoy.”

“We knew these people were coming,” a source just told me. https://t.co/T1vvbHcHbv

NEW: Police are running drills as they prepare to crack down on truckers. This is right outside of Ottawa.pic.twitter.com/VCrGWI3gHU

Canadian police are pouring into downtown Ottawa to start cracking down on the truckers who have been occupying the city’s streets for weeks in protest of COVID-19 restrictions. pic.twitter.com/sezrtybM0d