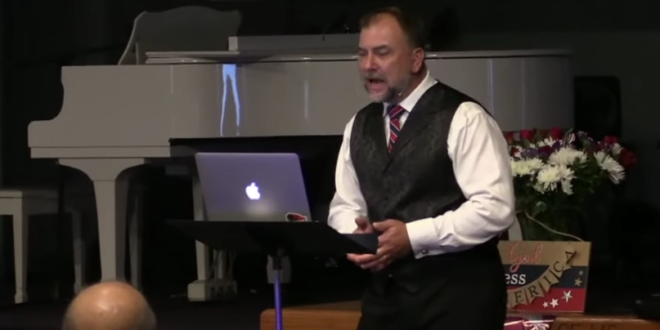 RCMP have laid charges under Alberta’s Critical Infrastructure Defence Act against a controversial street preacher who is being blamed for extending the blockade at the Coutts border crossing. Artur Pawlowski of Calgary was arrested after he gave a speech last week at the Smugglers Saloon in Coutts, where protesters have been blocking travel to the United States.

Pawlowski gave what prosecutor Steven Johnston called an “impassioned” 20-minute speech to protesters. He told them not to give up and said there were not enough RCMP officers to deal with the situation. Pawlowski is charged with two criminal offences including mischief over $5,000 as well as interrupting the operation of essential infrastructure in a manner that renders it inoperative. Pawlowski’s supporters have raised $26,000 for his release and legal fees.

Artur Pawloski has appeared on JMG several times for COVID-related arrests and this appears to be at least his third such arrest.

Pawlowski is fond of blaming natural disasters on God’s anger over LGBT civil rights, once telling the families of flood victims that the fatal waters were God’s tears over society’s acceptance of homosexuality.

He first appeared on JMG way back in 2010 when Canada revoked his then-church’s tax-exempt status for violating laws on political activities by churches.

His arrest video below is from his YouTube channel.