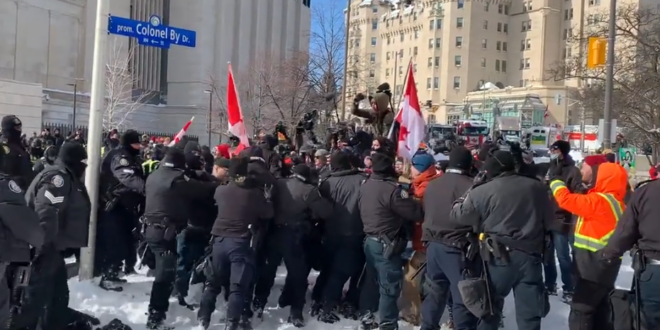 Large numbers of police officers are moving in on protesters in downtown Ottawa and making arrests during an intense clash with the demonstrators who have so far refused to leave the area. Images show police moving slowly on a relatively smaller line of protesters, with some being pulled out of the group and onto the ground before being arrested.

Protesters have linked arms, standing face-to-face with police while chanting “freedom,” “hold the line,” “my body, my choice” and singing the Canadian national anthem. Police say protesters are putting children between their operations and the protest site, adding, “The children will be brought to a place of safety.”

Police were seen smashing the window of one truck to pull the occupant out and arrest him. Protesters who refused to move were arrested one by one before they were taken away by pairs of officers.

Marked and unmarked police vehicles follow behind the officers on foot.

All media who are attending the area, please keep a distance and stay out of police operations for your safety. Anyone found within areas undergoing enforcement may be subject to arrest. There will be a media availability later today at 474 Elgin Street. #ottnews

Canadian police on Friday started arresting protesters as part of an operation to end a three-week blockade. https://t.co/Jy7nn2lu31 pic.twitter.com/jnsw3eciHZ