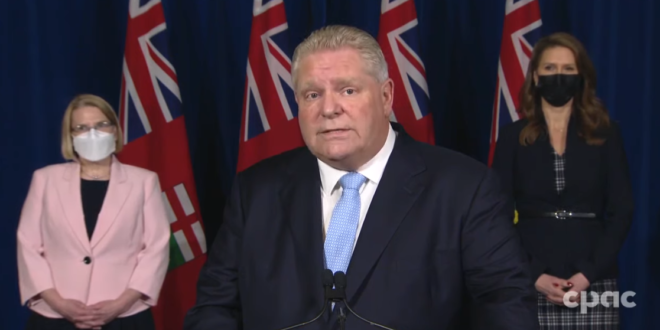 As of March 1, the province of Ontario will no longer require people show proof of vaccination to enter any indoor spaces, the premier, Doug Ford, announced on Monday morning.

In a call with reporters, Mr. Ford said that the change in public policy to rescind the so-called vaccine pass was based on the diminishing number of coronavirus cases and hospitalizations, and was not a concession to the demonstrators who have camped out in trucks around Parliament Hill; choked international trade by blockading a key border crossing in Windsor, Ontario; and inspired copycat protests around the country and world.

“Let me be very clear: We’re moving in this direction because it’s safe to do so,’’ Mr. Ford said. “Today’s announcement is not because of what’s happening in Ottawa, or Windsor, but despite it.”

#BREAKING: Premier Doug Ford says his government plans to lift capacity limits in indoor settings ahead of schedule and will scrap the province’s proof-of-vaccination system on March 1.https://t.co/ixla8PubFm