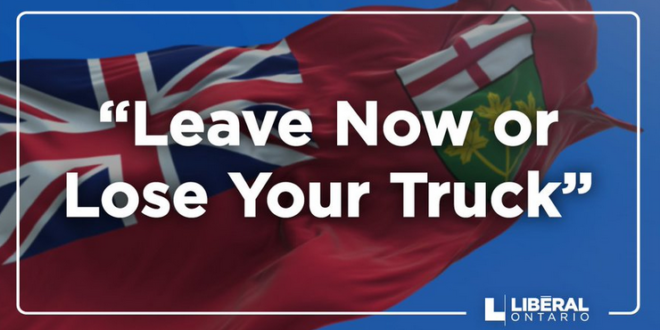 Ontario should seize the trucks of protesters who refuse to end the ongoing “occupation” of Ottawa, Liberal Leader Stephen Del Duca says. Attorney General Doug Downey should make it clear that Crown prosecutors will seek forfeiture of any assets used in the commission of a serious offence, he said.

Del Duca said the “anti-vax mob” is holding Ottawa families and businesses hostage, refusing to leave the capital city despite 11 days of protest. Residents have been “verbally abused” and many are afraid to walk around their own city, he said.

“I consider the people of Ottawa victims at this point in time,” Del Duca said. The protesters have ignored repeated requests to leave by Mayor Jim Watson, who declared a state of emergency over the weekend, and Police Chief Peter Sloly.

Ottawa police have adopted a strategy of starving the convoy, seizing fuel from a staging area on Coventry Road on Sunday evening and warning anyone who provides material support to the demonstrators could face arrest.

Police raided a protest satellite camp in a parking lot on Coventry Road on Sunday evening, confiscating diesel fuel that was stashed there. They arrested several protesters who refused to show identification, protest organizers said on social media.

The situation in Ottawa is out of control. If I was Premier, I would be sending a clear message to the anti-vaxxers engaged in the unlawful occupation, “leave now or lose your truck.” #OttawaOccupation #onpoli https://t.co/8XiRX4rQlk

NEW Liberal Leader Del Duca holds a news conference calling on Premier Ford to declare a provincial state of emergency due to the Ottawa protest. He also says the government should seize property “Leave now or you will lose your truck is the message our Premier should be sending” pic.twitter.com/lAsTHQ3O6f

Doug Ford’s Conservatives need to unequivocally stand with the people of Ottawa, and against those harassing Ontarians for days with blaring horns, and threats to the safety and well-being of residents, frontline workers, and local businesses. #OttawaOccupation #onpoli pic.twitter.com/8hx3jyunp9