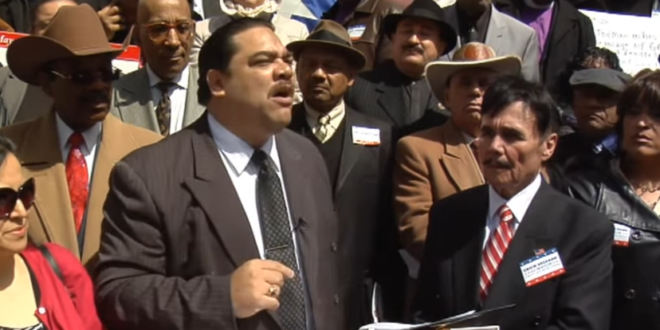 Mayor Adams dismissed criticism Tuesday over his decision to tap two Christian pastors with histories of anti-gay views for senior roles in his administration, declaring that the controversial hires are “what’s best for the city.” Adams, who has come under fire from the LGBTQ community in recent days, made the sweeping defense of his appointments of Fernando Cabrera and Erick Salgado [photo] after being asked during a press conference which gay leaders he spoke with and what he told them before announcing the picks.

At Tuesday’s press conference, Adams noted that both Cabrera and Salgado apologized in written statements for their past remarks. “People evolve,” he said. “They become better because of what they experience. I sat down with all of my appointees in a very rigorous appointment process. I believe that what they stated and how they feel in their own words. I heard them, I accept their apologies and now it’s time for us to bring our city together.”

As I noted last week, Salgado was an organizer of the infamous 2011 anti-LGBT hate march in the Bronx, where hate group leader Brian Brown spoke to the crowd and where a pastor declared (in Spanish) that homosexuals are “worthy of death.” [Video below.] In 2013, I reported that NOM endorsed Salgado’s bid for NYC mayor. Salgado earned less than 3% of the vote in the Democratic primary.

Mayor Adams dismissed criticism over his decision to tap two Christian pastors with histories of anti-gay views for senior roles in his administration.

He declared that the controversial hires are “what’s best for the city.”https://t.co/tW2a1ACyth

.@NYCMayor, how dare you tell NYC’s LGBTQ+ community and leadership that appointing homophobes to positions of power is “what’s best for the city of New York”. Hatred and negation of LGBTQ+ rights is not somehow balanced by political acumen. Reverse these appointments NOW. https://t.co/URTDcGIs73