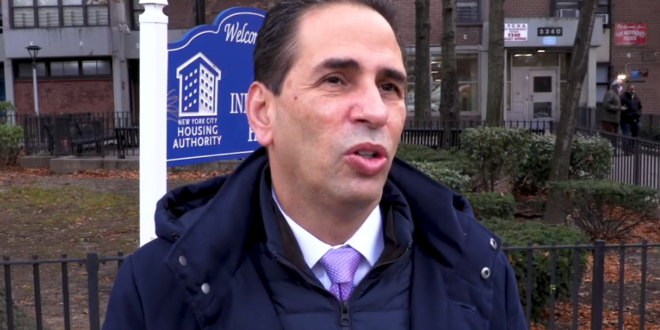 Mayor Eric Adams is casting about for a new position for a controversial pastor and former politician who has made anti-gay comments, after LGBTQ advocates revolted when he tried to name him head of a mental health office. Fernando Cabrera, who represented the Bronx as a Democrat in the City Council, has been showing up at a municipal building across the street from City Hall while he awaits his assignment in the Adams administration.

An Adams spokesperson confirmed Cabrera would not be appointed to lead the Office of Community Mental Health as originally planned, but did not address whether he would be tapped for another job. Cabrera walked into City Hall Thursday afternoon and sat for nearly an hour on a bench outside a suite of mayoral offices. He did not respond to several requests for comment.

Cabrera served in the NYC Council from 2010 to 2021. In 2019 he announced but later withdrew a challenge to AOC. Last year he finished second in the Democratic primary for Bronx borough president.

He first appeared on JMG in 2011 when he attended a rally against same-sex marriage alongside the red-caped Catholic loons.

That same year he was investigated after he allegedly demanded that a group affiliated with his church receive $100,000 a year from a developer seeking to turn the Bronx’s Kingsbridge Armory into a massive ice rink complex.

Cabrera then appeared on JMG in 2012 when he and viciously anti-LGBT then-state Sen. Ruben Diaz held a rally to protest a ban on churches holding services in public schools. The rally drew praise from hate group leader Tony Perkins, with whom Cabrera has been affiliated.

But it wasn’t until 2014 that Cabrera really got the attention of LGBT activists when he posted a video from Uganda [below] praising their proposed “Kill The Gays” bill, claiming that it would help reduce HIV infections.

Last week Ruben Diaz tweeted an objection [below] when it was first reported that Cabrera would not get the mental health position. And as you can see, Cabrera also has the support of the anti-LGBT Catholic League.

Mayor Eric Adams is casting about for a new position for a controversial pastor and former politician who has made anti-gay comments, after LGBTQ advocates revolted when he tried to name him head of a mental health office. https://t.co/mtRpoDrU95

I am sorry to hear the news about Rev. Fernando Cabrera. Same thing happened before to my wife Leslie. It’s seems that in this City you have to deny your faith and beliefs in order to have a job to sustain your family.

Millions of decent Christians believe that marriage should be limited to a union between one man and one woman. To claim that they are bigots because of their religious beliefs is the real bigotry.https://t.co/fEWkTP0aRs pic.twitter.com/dc9ikvJ0ZM