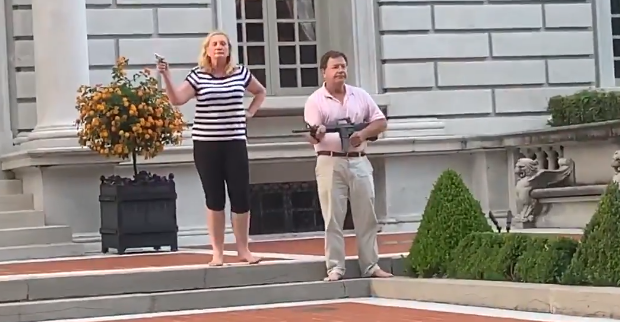 The Missouri Supreme Court on Tuesday indefinitely suspended the law licenses of two St. Louis attorneys who waved guns at Black Lives Matter protesters in 2020, but it stayed their suspensions and placed them on probation for a year.

The orders came after Missouri’s chief disciplinary counsel last year asked the court to suspend the law licenses of Mark McCloskey and his wife, Patricia McCloskey, in connection with their guilty pleas to misdemeanors stemming from the gun-waving incident.

The orders mean that if they violate the terms of their probation, their law licenses could be suspended indefinitely. The court also ordered them to provide 100 hours of pro bono legal services during their terms of probation.

Why not disbar them and let them reapply in a year? https://t.co/piT1FFkJ1e

When the McCloskeys show up in Jefferson City Missouri to testify FOR a dangerous Stand Your Ground bill (SB666), you can bet a @MomsDemand volunteer will be there in her red shirt to offer testimony against the bill.
💪🏼❤️ Thank You @CoMo_Kristin!! https://t.co/L3EQdoJYzv pic.twitter.com/fK6oiPqpjK

The McCloskeys have to play nice while on probation or they could have their law licenses suspended indefinitely. And yes, this is another great example of what a U.S. Senate candidate looks like in Republican America. 🙄 #VoteBlue https://t.co/mkkjEzGk0h

Previous CHATTER AWAY: Overnight Open Thread
Next 78% Of Canadians Fear US Strife Is Spreading At Home