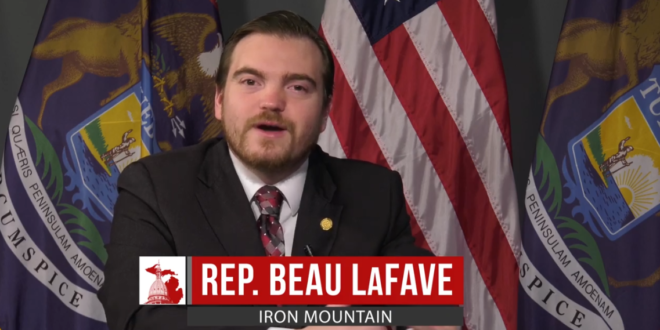 A handful of Michigan Republican lawmakers support creating new regulations that would ban large, private social media platforms from removing the accounts of political candidates that violate their terms of service.

It’s unclear that the proposal is enforceable and it may be unconstitutional: a federal judge in Florida blocked the implementation of a similar bill in that state, saying it likely violated free speech protections enshrined in the First Amendment among other issues.

Rep. Beau LaFave, an Iron Mountain Republican and GOP candidate for Secretary of State, is the bill’s lead sponsor. LaFave is joined by Rep. Matt Maddock, a Milford Republican and husband of Michigan GOP party co-chair Meshawn Maddock, and a cadre of other Trump-supporting Republicans in championing the measure.

In 2020, LeFave appeared on JMG when he brandished an AR-15 at a rally against Gov. Gretchen Whitmer. He later introduced a failed bill calling for Whitmer’s impeachment.

Meshawn Maddock, you will recall, is part of the fake electors scam and recently claimed that Michigan schools are providing litter boxes for students “who identify as furries.”

Under a new bill, someone “deplatformed” could sue/get $10k for every day they were booted from a site https://t.co/XzEOCrUKnf

The lawmakers who support it are some of the biggest Trump-backers in the House (LaFave, Maddock, etc).

It’s come to my attention that some “voice to text” voicemail programs have mispronounced my name. It sounds more like “Bo La-Fayve” not “Bowl of AIDS”.