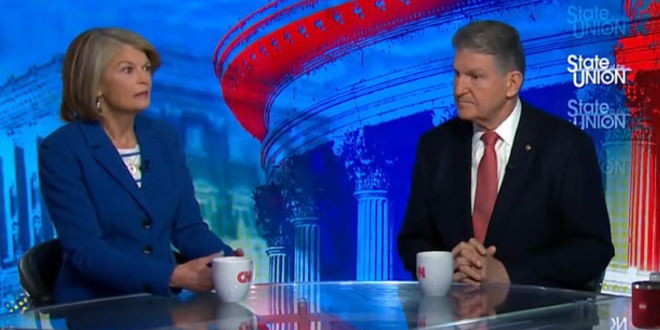 Manchin And Murkowski Endorse Each Other [VIDEO]

Democratic Sen. Joe Manchin of West Virginia on Sunday endorsed the reelection campaign of his Republican colleague Sen. Lisa Murkowski of Alaska, who is facing a tough challenger this year supported by former President Donald Trump.

“I’m endorsing my dear friend Lisa Murkowski,” Manchin said on CNN’s “State of the Union” Sunday. “Alaska could only be so lucky to have her continue to serve them.” Murkowski returned the favor, saying she’ll endorse Manchin, who is up for reelection in 2024, if he decides to run.

The two moderate senators appeared on the show in a joint interview to promote bipartisanship following the passage of President Joe Biden’s infrastructure deal and amid early talks to change the Electoral Count Act.

Manchin wraps up the interview by accidentally referring to Lisa Murkowski as “Susan” pic.twitter.com/tHcKZ3GOnW

“I’m endorsing my dear friend Lisa Murkowski. Alaska could only be so lucky to have her continue to serve them,” says Democratic Sen. Joe Manchin on GOP Sen. Lisa Murkowski’s bid for reelection. #CNNSOTU pic.twitter.com/k9dI6XNwci