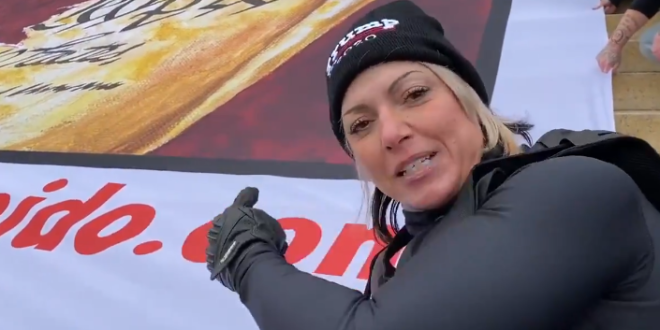 First, a reminder of who this nutbag is:

She took multiple photographs in October, November, and December 2020 with far-right Proud Boys leader Henry “Enrique” Tarrio. Her live videos from the Capitol riot were still available on Facebook.

In a livestreamed video, Forte stood in front of a massive poster of artwork that she brought with her. The art depicted House Speaker Nancy Pelosi. It was created by Scott LoBaido and measured 40 feet by 30 feet. The poster altered Pelosi’s appearance, giving her fangs.

And below is what took place last night.

It was a pleasure to speak at the @LogCabinNY meeting last night! Thank you patriots! 🇺🇸 pic.twitter.com/F5kilANDZM

Tina! Tina! Tina! @TinaForteUSA brought the house down last night with her passionate energy and genuine, heartfelt message. This New Yorker is going places! Get involved at https://t.co/o9KlBH4kd7 🇺🇸 pic.twitter.com/RxeEvhMkv0

We’re not part of “your community” of commie-alphabet-pronoun-racists. Our lives aren’t defined by our sexuality, gender, or skin color. We judge people on the content of their character and behavior and find “your community” subpar. Enjoy. #LGBFJB https://t.co/DU0ohP1Fkf

We can’t wait to see you again, Tina! Keep being an outspoken patriotic New Yorker! It’s what we need right now. #MakeAOCBartendAgain

LCRNY LOVES @TinaForteUSA 🇺🇸 she is the real deal! This is just the beginning. #AmericaFirst pic.twitter.com/6kBRUdonBj

The so-called #DontSayGay bill doesn’t ban LGBT discussion as the Big Gay Inc™️ media says. It allows parents to decide how and when to handle discussions about sexuality and gender, not public school teachers and officials. Parental decision over government indoctrination.

AOC’s Republican opponent Tina Forte is out with a new ad today. It’s poetry. A masterpiece. Your 2021 Republican Party! pic.twitter.com/UH0enCYqii