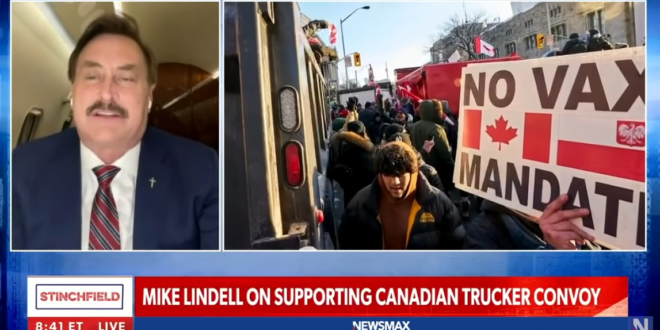 After his initial Tuesday shipment of MyPillow products was denied entry into Canada, Mike Lindell now has a backup plan to get free pillows to Canadian truckers: drop them from the sky via a helicopter.

The pillow maven told The Daily Beast late Wednesday night that he intends to drop his pillows into Canada from a helicopter “with little parachutes” attached.

“I can not give the location out, and it is no joke! I just confirmed with them [the helicopter company], and yes, this is the plan.”

Read the full article. Last night Lindell appeared on Newsmax, where he raged that Justin Trudeau is an “evil, disgusting dictator.”

The pillow maven stressed that he would drop his pillows into Canada “with little parachutes” attached. “Make sure you put that part in, or it could be dangerous,” he added. https://t.co/AQvX7c1lID