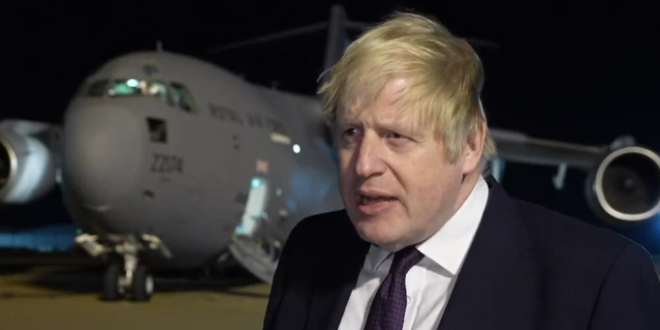 At the Ukrainian Cathedral of the Holy Family, in Mayfair, Mr Johnson said the UK has a system that grants people permission to enter for the longer-term when they are in fear of persecution, to reunite with family or “other purposes”.

But this means that, under current rules, Ukrainian refugees fleeing the invasion who do not have immediate family connections to the UK will be denied entry.

The European Union has agreed to host Ukrainian refugees for three years without asking them to apply for asylum, and regardless of whether they have a family connection in any of the 27 member states.

Yesterday Boris Johnson said the UK was way out in front helping Ukrainian refugees. Today the EU announced visa free travel for 3 years. Johnson’s government is only allowing close family members of British nationals. No way is the UK out in front in helping refugees.

What’s it going to take to shame you into doing the right thing @BorisJohnson @pritipatel? pic.twitter.com/fo5Jq6NgIk

Prime Minister Boris Johnson says the UK is “way out in front in our willingness to help refugees” and “will help people fleeing in fear of their lives”.

Johnson says internet is full of fake news and UK is “way out in front in our willingness to help refugees”. The Home Office is still tweeting about Ukrainians needing to apply for visas. Even at a time of war, we can’t seem to get clarity and facts from our government.

In the last days the world has witnessed awe-inspiring displays of bravery and heroism from the Ukrainian people in response to those who seek to obliterate their freedom by force.

The UK will not turn its back in Ukraine’s hour of need. https://t.co/NjKVzRefiD

The facts for Ukrainian nationals on the ground wishing to apply for a UK Visa:

Now that we have thrown off the shackles of the EU, we have the freedom to turn away Ukrainian refugees and let Russian propaganda channels carry on broadcasting from the UK. Welcome to Brexit Britain.#UkraineRussiaWar

Previous Belarusian President: You’re Pushing Russia Into WWIII
Next Michele Bachmann: The US Response To Ukraine Is Meant To Distract From The “Evil Biden Administration”