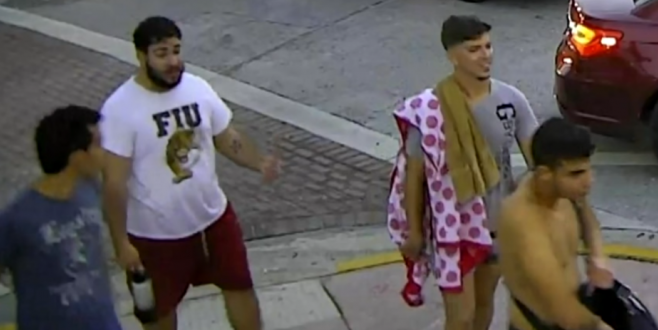 Four young men [photo above] did not act in self-defense when they beat up two gay men during a South Beach gay-pride celebration, a Miami judge ruled on Friday. Circuit Judge Ariana Fajardo Orshan declined to dismiss the battery charges against Juan Carlos Lopez and three others who’d been charged in the high-profile attack in April 2018. The four were charged with battery under Florida’s “hate-crime” enhancement.

The decision concluded a three-day hearing in which the four men sought immunity under Florida’s Stand Your Ground self-defense law. The controversial Florida law, passed in 2005, gave judges greater leeway to dismiss charges, and eliminated a citizen’s duty to retreat before using force to counter a threat. Prosecutors said Lopez attacked the men after Rene Chalarca accidentally brushed him coming out of the bathroom.

The assailants used anti-gay slurs during the attack and one of the victims was knocked unconscious.

As I reported in 2018, Lopez’s father came to his son’s defense, claiming that Lopez “loves LGBT.”

My first report on the attack is here. Watch the clips.