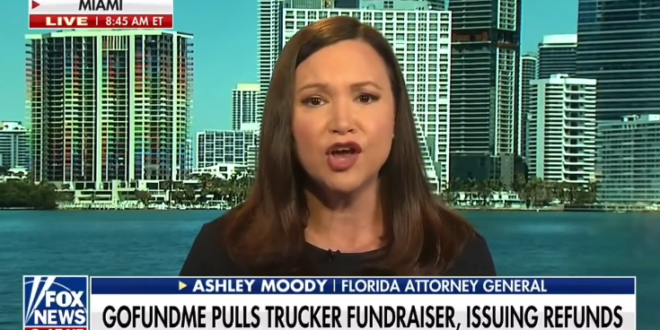 On Sunday’s Fox and Friends, Florida’s Attorney General stood with supporters of the Canadian anti-vax “Freedom Convoy” against the GoFundMe service, suggesting that what the fundraising platform contemplated this weekend could have been illegal.

Ashley Moody told a Fox News audience that she and Gov. Ron DeSantis will not tolerate threats, such as that made by GoFundMe, not to distribute funds to causes it doesn’t support such as the “Freedom Convoy,” a group of Canadian truckers.

“Folks wanted to help in this protest against heavy-handed government as people historically have done when government has tried to overreach and take away the freedoms of its people. People push back peacefully. And you have a business here that makes money off of people wanting to donate to that, and they just shut it down,” Moody asserted.

Moody, you may recall, was among the state AGs who sued to overturn the 2020 presidential election. She’s also behind multiple anti-vax lawsuits.

I’m sick and tired of corporations imposing their political will on unsuspecting consumers.

As always, I will work with @GovRonDeSantis to ensure Floridians are protected. https://t.co/ZgHoKeH8iP

Our @GovRonDeSantis was completely right in calling-out GoFundMe’s nonsense! In Florida, we’ll always fight to PROTECT your freedom!

Always great to be on with @RCamposDuffy on @FoxNews! pic.twitter.com/g968F9weSN

Previous Rubio Backs Pence On Power To Overturn The Election But Refuses To Say Trump Was Wrong About It [VIDEO]
Next BOOK: How John McCain Impulsively Chose Sarah Palin