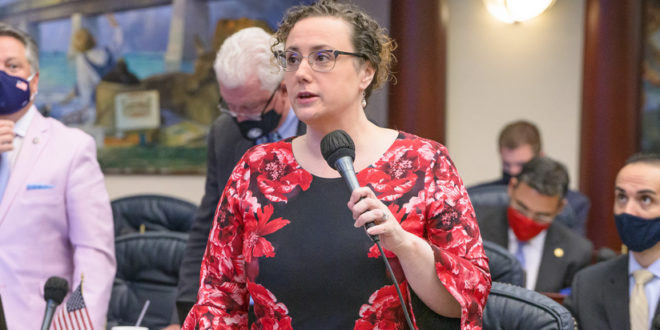 Florida is on the cusp of passing one of the most restrictive abortion measures in the nation. After more than five hours of debate, the House approved a bill (HB 5) early Thursday proposing a 15-week abortion ban in Florida. Passage in the Republican-controlled Senate is almost certain.

Sponsored by Vero Beach Republican Rep. Erin Grall [photo], the bill provides no exception for rape or incest, unless the life of the mother is in danger. In the event of a “fatal fetal abnormality,” a women seeking an abortion must seek the certification of two doctors.

This bill would be the most severe abortion restriction passed in Florida during the Roe v. Wade era. Here’s what you need to know.https://t.co/bsJaVH35DD

Republicans in the Florida House of Representatives approve ban on abortions after 15 weeks. https://t.co/KGkGKxxJtY

Florida’s House of Representatives passed a bill to ban abortions after 15 weeks of pregnancy late on Wednesday, a measure several Republican-led states are pushing as the U.S. Supreme Court weighs the constitutionality of such limits. https://t.co/f4Y5AGq0tp pic.twitter.com/Y5YOUclAd6

Last night, the Florida House voted to strip women of our constitutional right to safe, legal abortions — with no exceptions for rape or incest.

This bill will have a catastrophic impact for millions of women, girls, and their families.

We’ve come too far to go back now.

The bill limiting abortion rights is expected to pass the Florida Senate then DeathSantis to sign it. Florida is a damn mess! Organize and vote! https://t.co/Zs4CFCfKJR

Republicans in the Florida House just passed a shameful and extreme 15-week abortion ban, enabled by a governor intent on limiting the freedoms of anyone who doesn’t share his beliefs.

After yesterday’s floor session, @FLHouseDems convened a press gaggle to emphasize how amendments to make FL’s 15 week abortion ban were all denied, including those to make the bill less harmful via amendments to exclude rape, incest and human trafficking from the ban. pic.twitter.com/YCLQVM4ODM