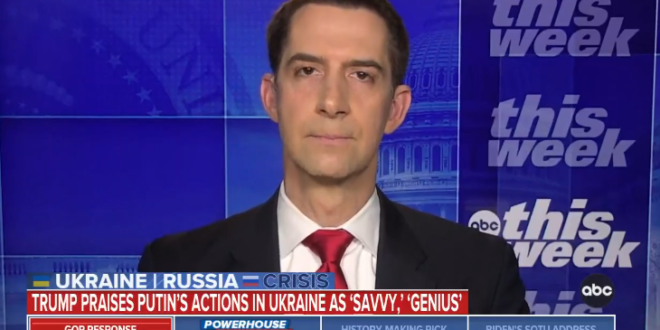 Sen. Tom Cotton, R-Ark., has refused to condemn former President Donald Trump’s praise of Vladimir Putin amid his invasion of Ukraine. “When Fox News asked him if he had a message for Vladimir Putin, he said he has no message. Why can’t you condemn that? I feel quite confident that if Donald — that if Barack Obama or Joe Biden said something like that, you’d be first in line to criticize them,” Georgie Stephanopoulos said.

“Again, George, if you want to talk to the former president about his views or his message, you can have him on your show,” Cotton said. Stephanopoulos followed up again. “I simply don’t understand why you can’t condemn his praise of Vladimir Putin,” he said. “George, again, I don’t speak on behalf of other politicians, they can all speak for themselves,” Cotton responded, ​again dodging Stephanopoulos’ question.

“I don’t speak on behalf of other politicians, they can all speak for themselves,” Cotton says. https://t.co/0FDYRx2QU2 pic.twitter.com/H8rvN7JBcp

George Stephanopoulos: I don’t understand why you can’t condemn Trump’s praise of Putin.

Tom Cotton: I don’t speak on behalf of other politicians. They can all speak for themselves.

Video of Tom Cotton in 2019: Rep. Ilhan Omar should not have spoken about 9/11 the way she did. pic.twitter.com/nZxZK7bzaC