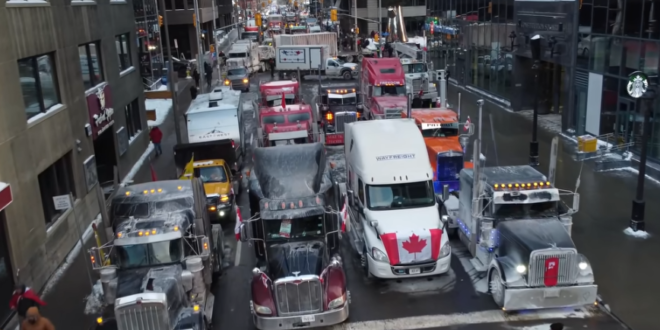 Companies Move Against Use Of Trucks In Protest

Daniel Miousse was shocked to see a photo of one of his company vehicles among the truck convoy protesters in downtown Ottawa, which was recently posted online. Miousse, who owns an industrial fence company near Montreal, said he had no idea the pickup truck or his employee were in the nation’s capital.

“One of our employees took our truck since, I think, last Wednesday,” said Miousse, who is currently in Florida. “I was very upset. So I sent four people Sunday morning to get our truck back.” He said he plans to fire the worker.

On Feb. 6, the website convoytraitors.ca, initiated by an Ottawa IT specialist, started posting names of companies that had trucks in the protest area, along with photos with the intent of “naming and shaming” those involved.

Some trucking firms are trying to disassociate from the ongoing protest in downtown Ottawa after a website published photos to “name and shame” companies that had vehicles involved in the demonstration. https://t.co/G86BQvJzLr