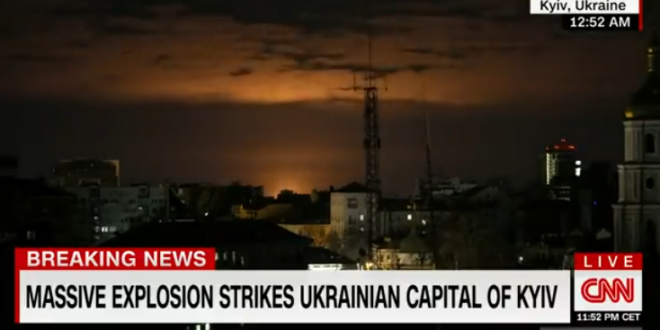 Two large explosions lit up the night sky to the southwest of Kyiv early Sunday morning with one detonation that appeared to be approximately 20 kilometers, or about 12 miles, from the city center.

The second explosion rocked western Kyiv just before 1 a.m. local time (6 p.m. ET Saturday). The second blast also came from the south-western part of the city, in the direction of the city’s second major airport.

Ukrainian Prime Minister Denys Shmyhal has accused Russia of war crimes after targeting civilian targets and said Moscow will have to face a “military tribunal.”

Massive explosion lights up the sky in Kyiv, per @MarquardtA pic.twitter.com/rmg038ATkA

❗️ A massive explosion in #Kyiv

It is reported that an oil depot near #Vasylkiv is on fire as a result of the strike. If this is true, a large-scale technogenic and environmental catastrophe is possible. pic.twitter.com/Yq1mx6ZNKZ